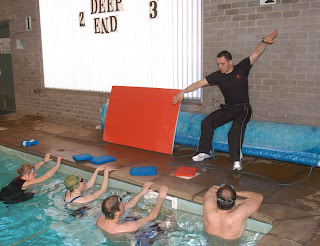 In part 1, we covered the basic pool applications that most coaches/fighters conduct when using pool time, although there should have been a few that may have been new to you.
In part 2 we are looking at the art of swimming for conditioning and how it can best serve a fighter concentrating on the stroke and pull variations, we will look at kick variations next time.


The above is a general list but as an athlete how can you use it, well being able to swim is a bonus even if it is as we say in swimming “untidy” in your strokes, however if you are a weak swimmer you can still use this magnificent form of training.

Equipment for a normal pool session

Goggles, kick float, pull buoy, hand paddles, sponge with belt (1 metre thin rope attached to either end) fist gloves, fins.
The list is not a necessity however will help you, but most drills use your body weight in the absence of kit.
One thing you should also take is a bottle of water, if you’re swimming at the right intensity you will sweat and dehydrate in the pool, something a lot of swimmers forget or ignore.


Let’s look at the various strokes

You may not be able to do all these strokes but if you can it would be a great arsenal of conditioning tools to put in your box.

For the main part we will predominantly use front crawl in the sets which you will later see in this blog, however you can use any stroke you wish as we wont be doing swim rest times and such like, as swimmers use when conducting training.


The aim of the sets is to keep it simple, and effective other aspects of swim training can be added at a later stage if required.


In order to progress your conditioning in the pool, you need to use drills, which are a way of overloading and using muscles groups functionally to develop all aspects.
Yes if you swim 60 lengths every day doing one stroke you will get fitter but not necessarily stronger or improve your technique, in fact most recreational swimmers use the wrong technique during a stroke causing them to expend too much energy sapping their strength.


Drills for each stroke vary but unless we are going to get majorly technical we can split the drills into three main categories Stroke,Pull and Kick.

Stroke- basically the whole body is used as normal when swimming ; however certain aspects of the stroke are focused on such as water polo drill, Tap drill.

Pull- quite simple we only use our arms to propel ourselves through the body, slight variations may be pull and drag where we attach something to the legs and as we pull through the water and drag it behind us (sponge for example)

Kick- we only use our legs to propel through the water using kick floats as aids or resistance, if you don’t have a float use your water bottle, fins also help with kick sets as they propel us faster but the main aim is to improve ankle flexibility and promote drive from the hips not the knees (a common fault in new swimmers).

Basic- Keep your legs closed and only use your arms to propel yourself, this takes discipline as you get tired you will want to use your legs, it is also a hard pull drill as the legs sink in the water, making you pull harder as they offer a drag effect by pulling the hips down. You can use a piece of tyre inner tube around the ankles to stop you kicking or buy ankle swim strap which is up to date and looks cooler!


Pull Buoy - By placing a pull buoy between our legs close to our crotch, we allow the body to remain horizontal in the water; this allows us to be streamlined making the stroke faster but not necessarily easier.


Fists- using one of the above pulls when swimming keep your hands clenched in a fist, this ensures more drag in the water as you pull back the arm in the underwater phase.


Hand Paddles- same basic pull or full stroke can be used, however the hand paddles allow a greater area to be covered when pulling in the under water phase, allowing greater purchase in the water to propel you forward and also ensures that better technique is used, e.g using all the back muscles in the stroke rather than just the shoulders, you will feel it if its done incorrectly.


Fist Gloves- much the same as hand paddles however the gloves prevent overuse injuries on the shoulders to a degree, be careful however as to much use will mean your fingers stay open when conducting the stroke meaning incorrect technique = more energy expenditure.


Water Polo- this is the stroke used by as the name suggests water polo players and adapted as a drill by triathletes the world over, the front crawl is conducted with the chin on the surface of the water, looking straight ahead and swimming shorter faster strokes with the arms, this is necessary as the hips dip and the legs cause a drag effect owing to the head position. This drill will promote good use of the major back muscles and doubles up as a hard kick set as you have to kick harder to propel yourself.


One arm drill- simply put we only use one arm when conducting the stroke, the other can be placed alongside the body or held out to the front, for a fighter this will place emphasis on the deltoids, lats and traps, as we wont be focusing on the technique aspect of this drill, your kick will increase in order to propel you.

Now we have covered the basics lets look at swim sets which can improve your cardio, strength, speed, flexibility. The sets have been simplified with regards to the terminology used for example as a fighter do we need to know swim at OBLAT! Levels.

Cool down
200m own choice

Warm Down
200 own choice

Session 2
Repeat above starting at 400.

Warm down
200m own choice


If you are unable to conduct a full swim session chose one part of it and complete the next part next time your at the pool, you can break down the session into fragments as long as you complete the sets.

This topic is vast and varied and is endless in the various types of drills and swim sets one can do, some coaches and fighters may be wary of this form or type of training, you only have to look at swimmers and see how conditioned they are, remember we are not using this to be swim fit, we are using it as a tool to increase us overall as a fighter.