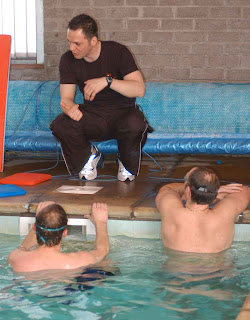 Swimming for conditioning is little used, little known or incorrectly used by most fighters and coaches.

Not that they the coaches don’t have a plan, or goal but a lot of coaches take standard gym work into the pool and stay at one end, doing partner carries and jump squats, all great stuff but if they really understood the benefits of swimming they could put together a swim specific programme from circuits to aerobic, anaerobic and endurance sets.

Swimming is a great exercise and will increase lung capacity if used properly by a fighter which obviously has benefits in the ring in relation to hydrogen conditioning, swimming also puts 25lb of pressure on the whole body when swimming and is also a weightless form of fitness.

Obviously the benefits can only be reaped if the fighter can swim and is comfortable in a pool environment. The exercises below can be changed at anytime and are only a suggestion.

There are many swimming aids out there from paddles to pull buoys and all can be utilised, however one of the easiest and cheapest is to wear a t-shirt and extra swim shorts during training for extra drag, however caution should be exercised and only use this extra drag every few weeks. If you don’t your body will adapt and you will require more and more clothing for drag.

Pool Circuits are probably the easiest to start with and understood so below are a few circuits to start of with.

Circuit 1
You will require access to swimming widths (deep end) for this circuit and require two mats one at either side for certain exercises, ensure a warm up is conducted prior to the start.

Swim 10 widths front crawl as fast as you can.

Pull yourself out the pool and do twenty press ups, slide into the pool swim a width underwater on the opposite side conduct nineteen press ups, then repeat until you have completed the set.

Rest is up to an individual between the sets but no longer than a minute.


Circuit 2
As above but run between width’s, this can be done in the shallow end or at the deep end if using the deep end use an aqua jogger which is a blue support belt which goes around the waist and is normally used for rehabilitation work in the pool.

Make sure you have a partner for this set.
Both sprint from the shallow end until the deep end starts then back ten times.
Partner 1 piggy backs number two for ten sprints above then change
Partner 1 sprint’s same distance backwards for 4
Partner 2 squat jumps until partner 1 finishes (head under water back straight bum touching heels then explode upwards)
Swap over
1 minute rest repeat once more

Again the above are a suggestion however I feel these are the better exercises a fighter should be using in the pool for conditioning, as the lungs need to be overloaded in order to increase oxygen up take.

The last circuit should only be used with fighters who are competent in the water and are able to swim at a reasonable standard.

The fighter then has their hands placed together behind their back using an elastic band, he then sinks to the bottom of the pool as soon as his feet touch the bottom he explodes to the surface sucks in a breath of air and submerges again, complete this for five reps.

If the band breaks the fighter starts again, for a more advanced workout tie the legs with an elastic band as well.

This drill develops the CV system and allows the fighter to go hypoxic as the hydrogen will start to soar through the body.

Give them a go and see how you get on, we have tried to minimise the amount of kit required, if you have no bands or aqua dumbbells two pull buoys will suffice for a start.

Next time we will look at swim sets to develop the fighter and add additional training to their arsenal.

If you try them please get back to us and leave a comment.